Coldcard is a Bitcoin hardware wallet from Coinkite manufacturer. The platform runs on a standard STM32 microcontroller paired with a secure memory which provides secure storage of the seed behind authentication protection. Relying on a secure memory rather than a standard microcontroller, this wallet has a good security design. The firmware code is Open Source, available on their GitHub repository. The project is active and well documented.

In early 2019, we evaluated the security of the Microchip ATECC508A secure memory. This circuit is commonly used in IoT applications as the root of trust, and also in the Coldcard wallet in its Mk2 version (latest version today is Mk3). This article explains how a vulnerability we identified in this secure memory can be used to recover the PIN code of a Coldcard Mk2 hardware wallet. The ATECC508A vulnerability is not detailed in this article: it will be presented soon during next SSTIC 2020 conference.

The Coldcard wallet runs its operating system on a STM32 microcontroller. It has a keypad, a screen and a genuine check LED. It can be used directly connected to a computer with a USB cable, or in air-gap mode with the help of an SD-card. All the components are inside a plastic enclosure which is difficult to open without leaving any tamper evidence. 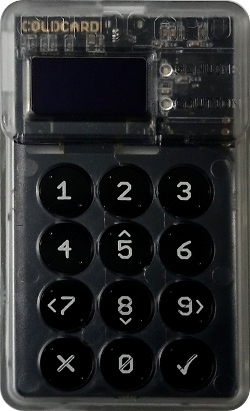 Recent research publications showed STM32F microcontrollers are vulnerable to hardware attacks, usually allowing recovering all the content of their Flash memory 1 2 3. Therefore, storing the secret seed in the Flash memory of the microcontroller is highly discouraged unless a strong passphrase is enabled and encrypts the seed. Protecting the seed behind PIN code authentication, Coinkite chose to store the sensitive data of the wallet inside a secure memory - the ATECC508 from Microchip - which is paired with the main microcontroller. The secure memory grants access to the seed once pairing is checked and knowledge of the PIN code is proven. This wallet design is stronger than wallets relying only on the vulnerable STM32F readout protection.

The ATECC508A secure memory has 10 kB of EEPROM memory, organized in three zones:

The DATA zone has 16 data slots which can store small chunks of data, and be used as keys for unlocking other data slots. Each data slot has access rules defined in the CONFIG zone. The EEPROM memory of the chip cannot be read or written directly: only the firmware of the secure memory has access to this memory, and it exposes commands to setup the configuration, read and modify the stored data with authentication and access rules checking.

The device also features two monotonic 21 bits counters, used by the Coldcard wallet to implement PIN-try-counters. Those counters are stored in the CONFIG zone.

The list of commands was fully documented in the datasheet accessible on the Microchip website, but it looks like they recently restricted this document under NDA and it’s no more available on their website. It can, however, be found here on alternative websites. The ATECC508A firmware is stored in an internal ROM memory, which cannot be read nor updated. Our security assessment of this secure memory was therefore conducted in a black box approach.

The data slots of the secure memory have very limited size. The Coldcard Mk2 wallet uses them as shown in the table below. The most relevant data slots have been highlighted. This configuration is defined in the ae_config.h source file.

(1) Data slot size. Less may be used by the application. For instance, the PIN hash data slots only use the first 32 bytes block.

The elliptic curve cryptography component of the ATECC508A secure memory supports only the NIST P-256 curve. It cannot be used for signing Bitcoin transactions (which uses the secp256k1 curve), and all the cryptographic operations related to cryptocurrencies are actually performed by the STM32 microcontroller. Before signing a transaction, the microcontroller will authenticate the user by querying the PIN code and fetching the seed stored by the secure memory. The secure memory will enforce PIN code correctness - the MCU cannot fetch the seed if the PIN is incorrect. The process can be summarized as following:

During our evaluation of the ATECC508A, we found a vulnerability allowing an attacker to retrieve the content of a data slot configured as secret with no read possibility (even when authenticated).

This attack is performed using Laser Fault Injection, a state-of-the-art testing technique used in the smartcard industry by evaluation laboratories. This work is not covered by this article and will be presented in details during the SSTIC conference in June 2020, but to sum it up, we physically injected a fault during the execution of the secure memory to bypass the access conditions verification of a targeted data slot. This is an invasive attack which requires physical access to the secure memory die: 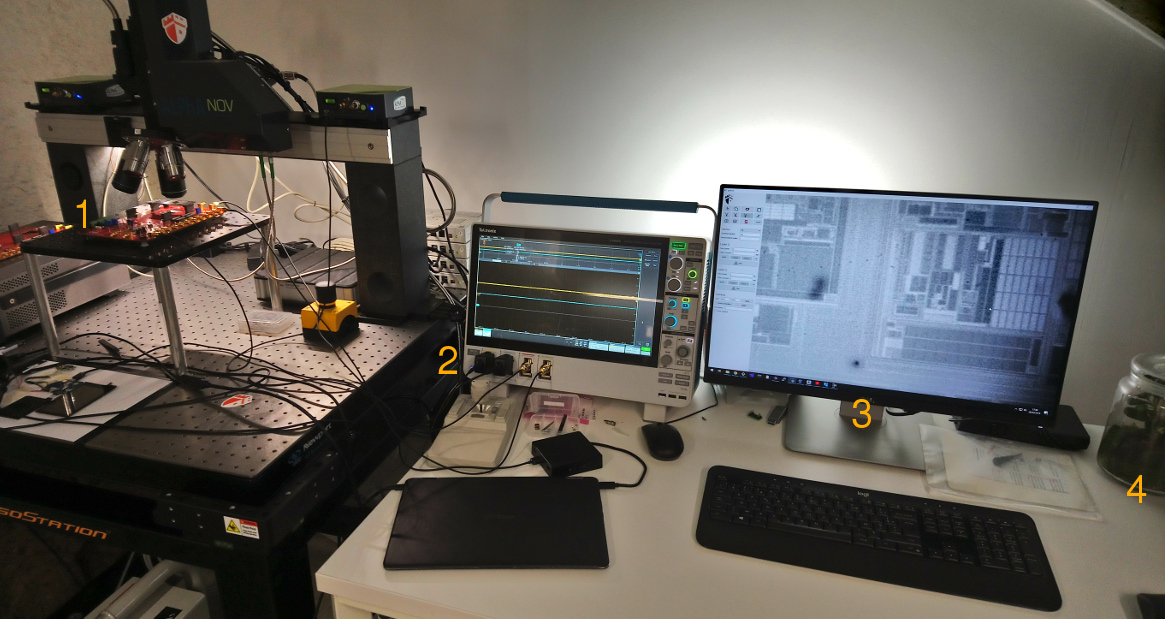 Our laser evaluation platform… for the most curious...
From left to right: 1. Scaffold board (red) under the laser microscope. 2. High-end oscilloscope. 3. Computer with dedicated laser scanning software and microscope camera display. 4. Plant.

Close up on the microscope and Scaffold board with ATECC508A daughterboard inserted. 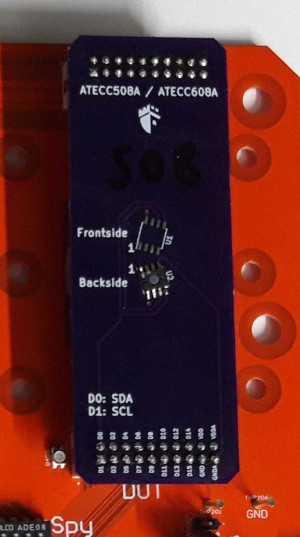 Both Pairing and PIN1 data slots meet the configuration requirements for being eligible to the vulnerability of the ATECC508A. Retrieving the content of those two data slots gives two options:

How bad is it?

The security scheme of the Coldcard Mk2 wallet is well designed and relies mainly on the ATECC508A secure memory, which is a smart design decision. The equipment required to perform the physical attack of the ATECC508A is expensive: about $200k, which limits the potential attackers. It requires serious knowledge and expertise, and the exploitation is difficult.

As there is no try counter supported by the ATECC508A, authentication trials on slot #3 are not limited. With the knowledge of the pairing secret, online PIN brute-force would be possible by sending authentication requests directly to the secure memory. The only limiting factor is the processing time of the secure memory, and an attacker would be able to try a lot of PIN codes.

Hence, brute-force mitigation still relies on the STM32L4 microcontroller, which is not very secure. Fortunately, the glitching attacks previously discovered on the STM32F2 and STM32F4 devices does not seem to apply to the L4 series.

This work was conducted on the Mk2 revision of the wallet, which is no more available. Coinkite recently released the new Mk3 version, which fixes the issues mentioned:

Use of secure circuits is considered best practice for protecting secrets in a system. Those circuits are much stronger than standard microcontrollers. The vulnerability we found is powerful, but required really expensive equipment, a lot of efforts and expertise. Compared to microcontrollers, where a simple low-cost voltage glitch can give full access to the Flash memory, the ATECC device can protect from a wide range of attackers.

The updated Coldcard Mk3 version has stronger security, mainly enforced by the use of the ATECC608A secure memory from Microchip. If you own a Coldcard Mk2 as your favourite wallet, you can now go upgrade it :)

Our attack is not applicable to every use of the ATECC508A. In particular, we are not able to retrieve a data slot declared as a P-256 private key. Many IoT applications relies on those P-256 keys and can still be considered somewhat safe. Additionally, this circuit is now considered deprecated and use of its successor - the ATECC608 - is recommended by Microchip for new designs.

Our research lab found the ATECC508A vulnerability in May 2019. The full details of our attack has been shared with Microchip in June 2019 to help them improve their design and fix those issues. As this is a hardware flaw which requires a silicon change, the process of fixing it can be much longer than patching a software vulnerability, and we agreed to give Microchip extra time to plan a new silicon release. Microchip has been really cooperative and we had constructive discussions, we feel they are really willing to improve the security of their solutions. Coinkite manufacturer has been noticed about the vulnerability as well.

Previous Ledger's CTF 2018 and side-...
Next KeepKey Hardware Wallet Und...