KeepKey Hardware Wallet Under The Scope

Follow-up on PIN verification against side-channel attack: KeepKey hardware wallet under the scope.

TLDR: We mounted a 2-steps side-channel attack on the PIN verification function storage_isPinCorrect_impl of the KeepKey hardware wallet. If an attacker has a physical access to the device, the attack exposes the user PIN of the device.

Following our study on Trezor One last year, we decided to take a look at KeepKey hardware wallet. Even though the KeepKey PIN verification mechanism is different from the one we broke on Trezor, the main reasons the scheme is vulnerable are that:

In the following document, we show the feasibility of a side-channel PIN extraction, by mounting two distinct profiled side-channel attacks:

As it will be explained later, once these two values are known, an off-line brute-forcing allows to retrieve the user’s PIN.

We will first describe the attack scenario. Then we explain how side-channel works on embedded devices, and what are the principles of a profiled Side-Channel Attack. After that we will present KeepKey PIN verification mechanism, and the experimental results we got on both the attacks.

We consider here a physical attack on a hardware wallet. The physical access to a victim device is mandatory.

The attack context is the following. The attacker:

At the end, the attacker has he correct PIN: he can use the device to move all the funds.

In the present study, we focus on the power consumption of the device, during the storage_isPinCorrect_impl function. These physical measurements (called side-channel traces or leakages) are recorded using a digital oscilloscope. Finally, a statistical post processing is applied to retrieve sensitive data.

Side-Channel Attacks can be divided in 2 categories: Profiled attacks and Unsupervised attacks.

The context of an open-source code running on a STM32 fits perfectly with profiled attacks .

For all these analyses, lascar (Ledger’s Advanced Side-Channel Analysis Repository) has been used. We have recently open-sourced it here.

Before Trezor patched their PIN-verification mechanism following our previous side-channel attack on Trezor One PIN, KeepKey already used a protected storage, where the sensitive content of the flash was encrypted by a storage_key, which is unwrapped by the user PIN.

A wrapped_storage_key and a storage_key_fingerprint are stored on the flash, along with the encrypted sensitive data.

The whole PIN-verification is implemented within the storage_isPinCorrect_impl function, described in the following diagram.

All the cryptographic functions used (AES-256 CBC, SHA-512, SHA-256) are implemented within trezor-crypto library, without side-channel protection. The final memcmp is the native libc implementation, also not protected against side-channels.

A first profiled side-channel attack will be mounted on the AES part and will expose wrapped_storage_key. A second one will target memcmp and will expose key_fingerprint.

Another important point is the Pin-Try Counter (PTC) mechanism. On KeepKey, there are no explicit PTC. But at every wrong PIN attempt, a timer is doubled, so that in the end one should expect to wait 136 years to request 32 wrong PIN in a row.

We will need to take this countermeasure into account for our attacks, since we won’t be able to request as many wrong PINs on the device as fast as we want. In order for the attack to be practical, we have to set a “time threshold” to pass the attack, before the KeepKey user realizes its device is lost and erases it.

From a side channel perspective, one PIN attempt results in a side-channel trace.

Given the fact that the PTC implements a timer, the side-channel robustness of the KeepKey PIN verification mechanism relies on two questions:

During all this study, we used a genuine KeepKey device with a modified firmware, allowing repeated calls to the targeted function: storage_isPinCorrect_impl

We actually used our evaluation board scaffold to mount the attack, used to facilitate the setup and communication. As it can be seen on the following picture, the KeepKey device is running on scaffold, and its power consumption is measured through scaffold inner resistor and an oscilloscope. 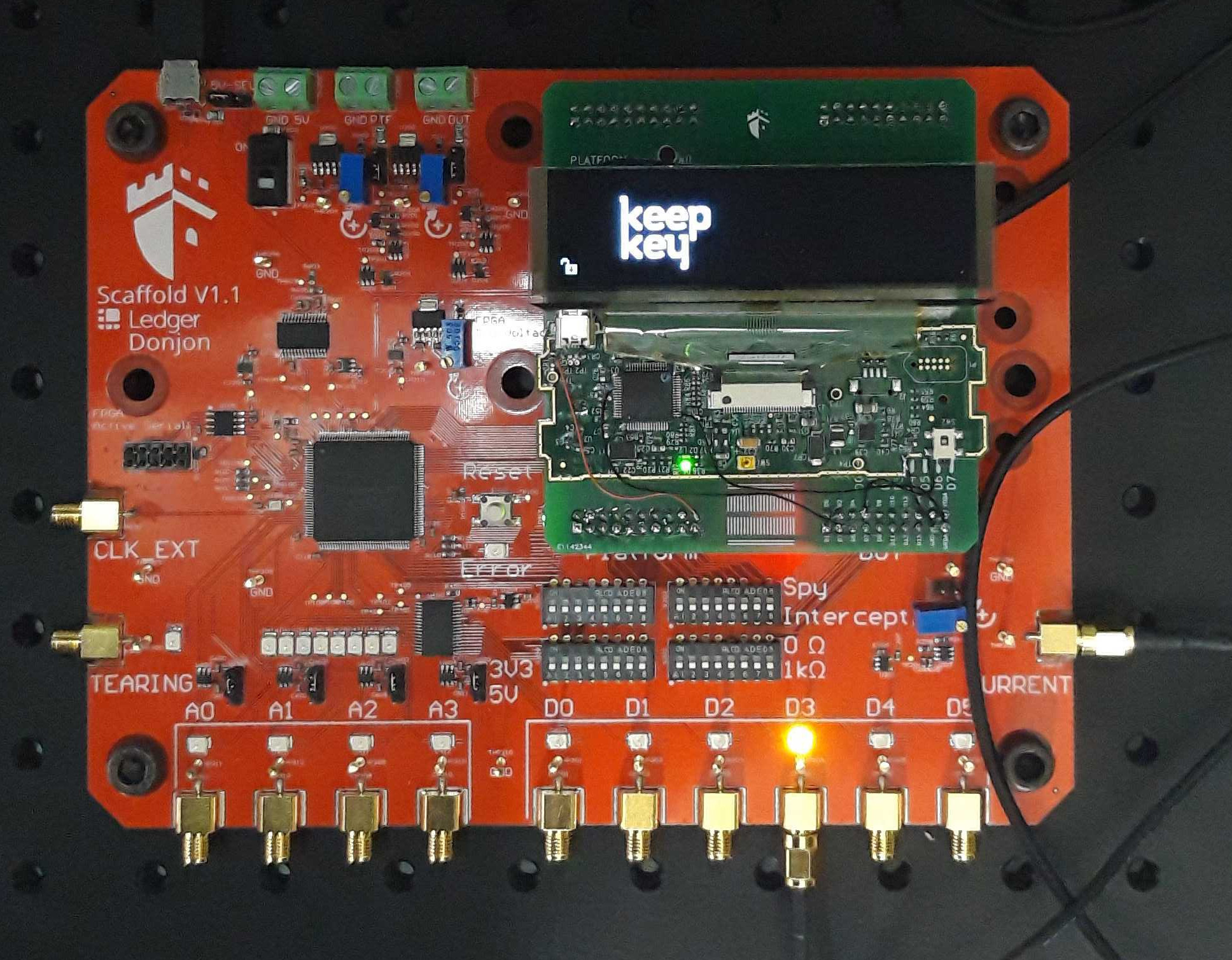 To acquire the power consumption, a PicoScope 6000 Series is used.

To drive the side-channel acquisition/processing of the data, we use our side-channel open-source library lascar.

The two attacks we mounted are very similar in the sense that they both are profiled side-channel attacks. It means that the attacker has the opportunity to fully characterize the power consumption behavior during the targeted functions, on a device for which she controls the input. Once this profiling is done, she can use the profiling to match on new traces from a new KeepKey device for which the correct PIN is unknown.

For more information on profiled side-channel attacks use in this context, please refer to our Trezor attack paper: it explains the steps we take to mount such attacks:

We apply here the very same methodology, except that we target different sensitive values from the one used during the Trezor attack.

The first critical step of the storage_isPinCorrect_impl function is the AES part. An AES-256 CBC decryption is called with:

The purpose of this section is to try to mount a profiled side-channel attack able to extract the value of storage_key from KeepKey power traces.

To study the AES function used in the PIN verification, we extracted the AES part from storage_isPinCorrect_impl.

IMPORTANT: I insist on the fact that we want to retrieve the value of wrapped_key, which is the input of the AES, and not the encryption key (as it is done usually in an attack).

What we do first is to acquire a large set of power traces: 500K AES traces of 22500 time samples, where we set both the key and the input to known random values. We focus temporally on the first AES-256 round. This set of traces is called the profiling set.

Exhibiting a set of sensitive_values leading to a secret

We then exhibit a classical sensitive_value: the value for each trace, of a given byte of round_key_14 XOR input (where round_key_14 is the value of the last round key derived from the AES-256 key). During the first round indeed, the input is first XORED with the round_key_14.

This shows a strong dependency (more than 10% for most bytes) between the variance of our sensitive_values and the captured power traces.

Every one of these 16 sensitive_values will be used for a profiled side-channel attack, each one targeting the value of an input byte.

Once a sensitive_value function is chosen from the previous step, the profiling can be launched. Using the set of 500K traces, and the sensitive_values, one classifier per input byte is built.

A classifier is a decision function that is designed to predict, from a trace with unknown input value, the likelihood of the partition belonging.

In simpler words, the classifier for byte i applied on a power trace will answer the question: what is the most likely value for input[i] - round_key[i]? Moreover, it gives the probability for each possible value of each candidate for input[i] (since round_key[i] is known).

In profiled side-channel attacks, lots of types of classifiers can be used (Support-Vector Machines, Random Forests, Decision trees, AdaBoost, … neural networks if you prefer deep learning). In this very case, we used the simplest and fastest type of classifier: Linear Discriminant Analysis (with sklearn and lascar). In order to get a faster (and more efficient) supervision phase, a Points of Interest (POI) selection is performed for each trace. The POI are selected using the leakage characterization. For each digit, only the points of leakage where the NICV is the highest are used.

We focus here on a single byte of input, but without loss of generality, the attack extends to every bytes.

The profiling set has been acquired from a KeepKey device where both the input and the key are known.

To validate the effectiveness of our profiling attack, we acquired 100 batches of 25 power traces such that the input is fixed within each set.

Each one of these batches is passed through the classifiers computed just before. What the following picture shows is the progression for the rank of the solution for the first byte of input, with respect to the number of traces given to the classifier. Every curve indicates the attack progression on one batch. The red curve with cross indicates the mean rank of the solution over all attacks. 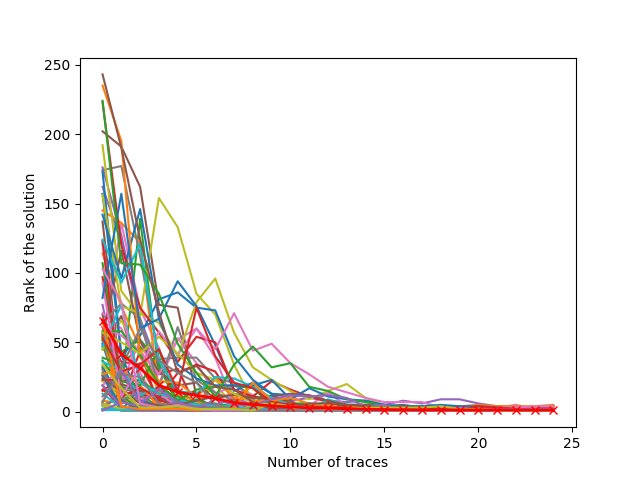 Reminder: in the case of the KeepKey PIN verification mechanism, input = wrapped_key. Hence, every one of theses batches of 25 traces can be seen as traces acquired from a new KeepKey device PIN verification, where the wrapped_key is fixed.

Regarding theses results, one should argue that:

But on the other hand, these results can be improved by:

Breaking memcmp with a profiled SCA

The final step of the storage_isPinCorrect_impl function is the memcmp part.

The profiled attack on memcmp is basically the same. We only use a different sensitive value.

What happens in memcmp is that 2 buffers (buffer0 and buffer1) are compared, byte per byte. In order to make a comparison, a subtraction is done.

Here is a source code for memcmp:

Note: One should notice that the native memcmp function is not time constant: the function exits as soon as there is a byte that differs. Although this flaw will not be used in here, it could lead to other timing side-channel attacks.

Again we acquired 500K traces with known random values for buffer0 and buffer1. This is our profiling set for the attack.

As before we compute the ANOVA using the sensitive value just described:

One can notice that the computed ANOVA values are higher than for AES. NICV reaches more than 50%. These results show a stronger dependency than for the AES, and imply that the attack should be easier (i.e. the attack should need fewer traces to conclude).

The profiling part is done in exactly the same way as for AES.

For the matching part, we acquired 100 batches of 25 power traces such that the buffer1 is fixed within each set (since buffer1 = key_fingerprint in our case). 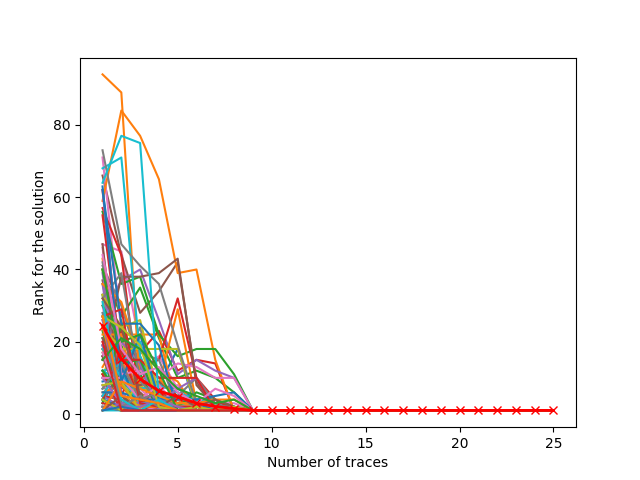 We then can see that our profiled attack needs no more than 8 traces to extract the correct value of buffer1[0].

Without loss of generality, similar profiled attacks targeting the 32 bytes of key_fingerprint will then allow us to extract its whole value within 8 traces.

Putting all together: PIN extraction

This article presents a PoC on how to retrieve the user PIN from side-channel traces coming from a locked KeepKey device.

Applying to this device the two profiled side-channel attacks presented here, by only using around 12 PIN attempts, we get, with a good success rate:

We can now mount an off-line brute-force, which will test each PIN on wrapped_key until the resulting storage key produces the correct key_fingerprint. Testing all the possible PIN (up to 9 digits) within a simple script takes around 10 minutes on a single thread.

The work presented in this blog post has been disclosed to ShapeShift on December 16, 2019.

We do not claim to have broken KeepKey hardware wallet with side-channel. This side-channel attack is even considered as minor when compared to other attacks we found on STM32 devices (since we only extract the PIN in this post).

We just want to state that whenever sensitive secrets are manipulated within a hardware security device, it should be done with proper care to prevent hardware attacks, especially when the target is a non protected microcontroller.

In the side-channel literature there are a lot of techniques, hacks and tricks to annihilate this class of attack. For instance, for the AES part, we recommended ShapeShift to take a look at the SecAESSTM32 repository. The project aims at proposing a C library to perform AES routines on 32-bit Cortex-M4 ARM architecture while taking side-channel attacks into account. The technical report gives a great description of the work done.

ShapeShift adapted the SecAESSTM32 library for Cortex-M3 to handle the side-channel on AES. They also replaced memcmp with memcmp_s, a constant-time implementation. A new firmware, 6.4.1, has been issued and correctly patches the vulnerabilities.